The asana in the middle of a Tang is the most familiar pose. 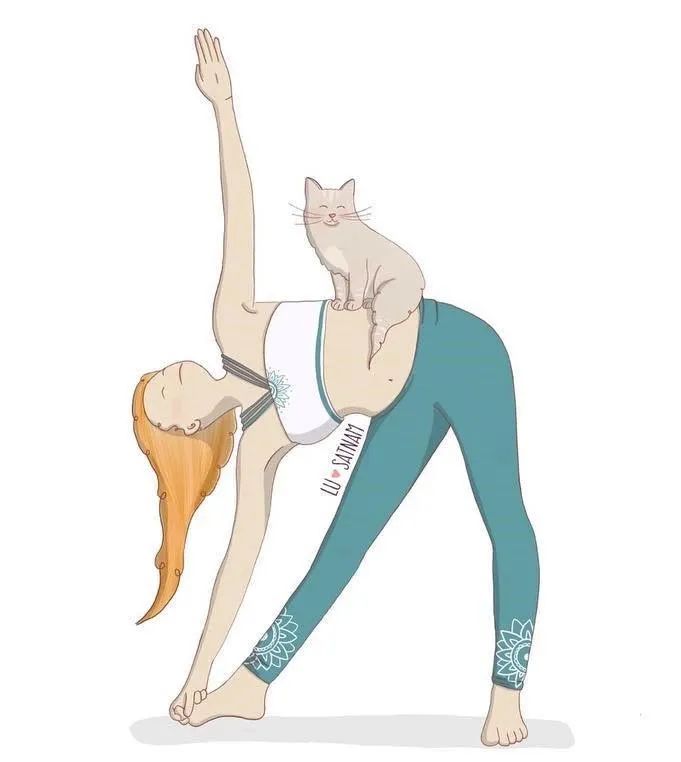 The previous sequences are the same.

Even if you practice advanced sequences, you still need to practice these triangles, side angles, double angles, etc., which shows the importance of these postures.

Standing pose is the basic asana, which is almost also found in other schools, such as Hatha, Iyengar, etc.

Although these asanas are relatively basic, it is not easy or even difficult to do well in any of them, especially the hidden level Asana – side angle twist, which is really difficult.

When I was able to tie horse D, I couldn’t turn the corner.

Here, triangle and side angle pose are few side extension poses in the sequence, which can increase the lateral flexibility of the spine.

It seems that there is no side extension pose in the first sequence.

The triangle twist and the above-mentioned side angle twist are twist poses other than malic C C and D.

Therefore, if the horse D cannot be tied, you can strengthen these two postures, which will be effective! In addition, these standing poses also play a very important role, that is, the shoulder opening and hip opening that many practitioners like.

In standing posture, almost all angles of the hip can be practiced to internal rotation, external rotation and back and forth rotation, which is also the foundation for the back lotus, hero, lying turtle and other postures.

For example, is the double angle pose very similar to the turtle pose? In addition to the ability to bend forward, it also exercises the flexibility of hips and legs.

In other words, if you practice the double angle style thoroughly, the turtle style will be much easier, and the same is true for the lying turtle.

When we practice, we can observe the feeling of hip details.

Although standing posture mainly exercises the flexibility of the whole spine, which can warm up the spine, it is actually a whole exercise combined with shoulder and hip.

This is one of the reasons why astongari does not recommend opening the shoulder and hip alone, because ah Tang’s asanas are all compound asanas.

Even if one joint is very flexible, it may not be able to do it in asanas.

For example, the triangular torsion requires a certain degree of flexibility for wrist, shoulder, chest, hip, leg, foot and the whole spine.

This is a whole exercise, and what connects the whole body is the spine.

When the spine is flexible and can be extended in all directions, it will be relatively relaxed in the back pose.

Having said so much, some practitioners may say that these poses are very simple! It’s not so exaggerated.

Although these standing postures are all basic postures, it is not difficult to do them, but if we do them more deeply, the difficulty of postures will increase geometrically.

For example, in the double angle pose, if the feet are opened a little larger, it will be easy to touch the ground on the top of the head, but if it is opened a little smaller, it will be difficult, which requires a good rotation of the hip root and the ability of the spine to extend downward.

Similarly, in the triangle side angle and twist, the size of the feet and the staggered position also determine the difficulty of the pose.

In the side corner twist, if your feet stand in a straight line and open a larger distance, it will definitely bring you new surprises.

In the teacher’s words, “if you deepen the basic asanas, the later difficult asanas will be much simpler.” Don’t underestimate these standing poses.

These poses are thoroughly practiced and even more useful than some so-called difficult poses.

If you can’t do one pose, you must take the pose in front of it seriously.

His more articles: TA said that yoga practice is not difficult, it is difficult to stand on the mat every day! TA said that when practicing yoga, the body is very tight and heavy, maybe the diet is disordered! TA said ｜ don’t avoid singing, this is an attitude towards yoga practice! TA said ｜ have you grasped the self observation and understanding in yoga practice? TA said that the best yoga pose in the world is that I didn’t pay much attention to it, but I did it with practice! Click “watching” (in the lower right corner of the page), let’s be accompanied by yoga, calmly and gracefully face everything, and continue to move forward through the wind and waves! Welcome to pay attention.

Long click on the following figure to identify the QR code added..