She was once isolated and ridiculed as a “village girl” and lost her job because of her old and bitter appearance.

Gufa meridians Yoga made her return to a girl at the age of 42.

She was 20 years younger from inside to outside. 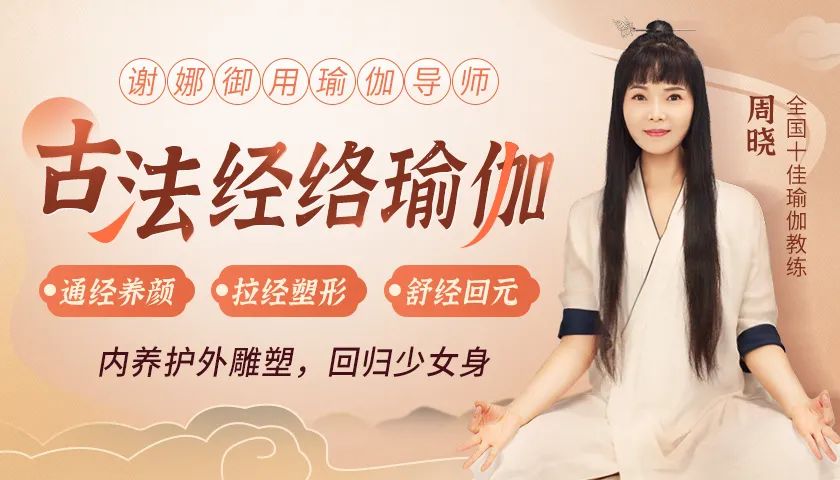 In the past 17 years, Zhou Xiao has changed more than 112645 students through Gufa meridians yoga, helping them regain their youth, health, self-confidence and optimism.

But she was never complacent and always grateful: “it’s my luck to develop meridians yoga”.

Zhou Xiao, who was born in a mountain village, was once rustic and thin.

Her low self-esteem made her extremely harsh and harsh.

Even though she graduated from Tsinghua University, her long-term resentment and resentment have already made her look old and bitter.

The students have also collectively isolated her, even face differences, and blocked all her job opportunities.

Zhou Xiao, who is not popular and has no job, almost suffers from depression.

Until one day I walked aimlessly in the park and met a group of people practicing yoga.

Her stretched limbs were as beautiful as peacocks.

She looked at them, and her heart was much calmer.

When she got home, she immediately looked up the information about yoga and learned that it was a sport that could shape people’s body and enhance their temperament.

Immediately use all your savings to sign up for a yoga class and practice.

It is no longer the body of “bean sprouts”, but the body is soft and curved, and the whole person is gentle and has a lot of temperament.

Her generous image and high education made her find a job smoothly.

The habit of loving sports also made her very popular with her colleagues.

But the ensuing work pressure made her stay up late, burst acne and began to grow spots.

Even practicing yoga could not stop the gradual obesity caused by sitting for a long time.

More importantly, with the deepening of the course, yoga poses are becoming more and more difficult, and she can’t do it at all! She went to seek traditional Chinese medicine to regulate her body.

However, the doctor told her: “the blockage of spleen and kidney channels, blood stasis and toxin accumulation will affect the skin and body.

Just open the meridians and fill the blood in the body.

These small problems will be good.” this gave her a flash of inspiration.

Looking back on her changes in yoga over the past few months, she made up her mind to combine the meridians and yoga with traditional Chinese medicine, to regulate the body and resist the old age.

In order to study the body structure, she went to the American spiritual Yoga Institute for further study and had a direct dialogue with the body.

In order to practice more correctly, she traveled to India, pursued the original culture of yoga in ancient yoga holy places such as rishikasi, Mumbai, Puna and New Delhi, and found yoga postures that open up the meridians of the whole body.

▲ Zhou Xiao studied in India and practiced daily in the research center.

She also found that yoga is the only way to exercise the whole body and internal organs.

Really reduce fat from the inside, not just the outer layer of skin and fat, and look better and better.

This is the secret of meridian yoga! It took her 10 years to develop this set of ancient Dharma meridians yoga, which is specialized in dredging meridians, anti-aging and rejuvenation.

First dredge the meridians: dredge the kidney meridians, spleen meridians and twelve meridians, accelerate the elimination of toxins, clean up the body, and regain the body and young muscles of girls; Re meridian maintenance: massage and squeeze yoga posture to unblock Qi and blood, balance yin and Yang in the body, and restore a healthy and young state; Finally, meridian Nourishment: through ancient meditation, regulate breathing, sleep, emotion, physical and mental balance, awaken life energy and become more energetic and confident.

Nourish the internal organs, unblock Qi and blood, and maintain a healthy and young state from inside to outside.

Now 42 years old, Zhou Xiao is as young as a young girl in body and mind.

He is 20 years old! Former college students were surprised to see her and couldn’t recognize it: at the age of being a mother, why is the skin so tender and the figure so good? Moreover, her peaceful and optimistic character also makes her make more and more friends.

Identify the QR code below and be a frozen girl with teacher Zhou Xiao! With 17 years of yoga teaching experience, she helped 100000 + people to regain their self-confidence.

With the growth of age, most people are afraid of aging, and the functions of various systems of the human body begin to decline.

For example, the content of blood lipid increases, the blood becomes viscous and the microcirculation decreases; Wastes, toxins and impurities in the body and blood cannot be metabolized normally; Aging of internal organs: such as aging of ovaries, breast diseases, aging of uterus and aging of internal organs; External aging: such as dry wrinkles, spots, dark yellow and other skin problems…

The more you practice, the more you understand that no matter how expensive your skin care products and maintenance products are, they can’t fight against aging better than the filling of Qi and blood in your body.

Her life now is inseparable from Yoga: “for 17 years, I have been engaged in yoga.

Yes, I concentrate on doing it without any empty words!” she has only done one thing in her life.

This year, she was lucky to be invited to be the on-site judge of Hunan Satellite TV’s “Yoga in China”.

Zhou Xiao wants women all over the world to resist aging, gain self-confidence and beauty through it.

Therefore, she hatched Zhou Xiao yoga studio offline, which has a powerful infection teaching method and has helped more than 100000 women change.

It was even awarded the honorary title of “China’s top ten Yoga coaches” by the State Administration of sports of China.

She has also brought ancient Dharma meridians yoga to the world.

Over the years, she has led global entrepreneurs to study yoga in more than 100 countries, such as Rome, Virgin Mary Church, Kenya, Lhasa and other places.

Although she has trained many yoga coaches, the popularity of meridian yoga is far from enough.

When she occasionally went to the countryside to meditate, she realized that rural aunts with rough skin and lumbar muscle strain who worked hard for farm work needed it more.

She immediately stayed in the countryside for several months to teach meridian yoga and regulate her body for free.

Every morning, we practice together.

Our faces glow with youthful brilliance, our bodies become lighter and lighter, and there is no pain.

It also drives us to practice.

After receiving positive feedback from students all over the world, she wrote her yoga experience and research experience of more than 10 years in the book learning Yoga with Zhou Xiao, hoping that more people will live younger and younger by relying on ancient meridian yoga! But Mr.

Zhou Xiao is too busy.

To this end, we specially invited Mr.

Zhou Xiao to take classes on the recording line, which coincided with the teacher’s original intention to benefit all women.

After 6 months of planning, recording, editing and subtitle, the teacher finally condensed the essence of his teacher in 17 years into a video course “ancient meridian yoga”.

Identify the QR code below to make you more young when you are frozen! If you do yoga well, your beauty is not easy to grow old..